Trudeau made the announcement prior to a roundtable meeting focused on promoting trades for women at a Nova Scotia Community College campus in Dartmouth, N.S.

In brief opening remarks before the closed-door session, Trudeau said trades should be seen as a viable option at a time when there’s “a lot of uncertainty” about where the jobs of the future will come from.

“We know that trades are a great career that offers professional development, continued advancement, and a level of satisfaction that is remarkable,” he said.

The Liberal government announced $6 million over two years in the 2019 budget to create a national campaign to promote skilled trades to young people.

However, Trudeau acknowledged that breaking into trades isn’t an easy proposition for many in the job market.

“There can be challenges for certain people to get into trades, particularly minority groups, or women, or marginalized communities. That’s why talking about how important trades are is important . . . for everyone.”

The advisory committee is to lay the groundwork for a national campaign to encourage apprenticeships and promote the skilled trades as a career. It will lead consultations, explore partnerships, and provide advice to the minister of employment, workforce development and labour.

Members named to the committee so far are the three co-chairs Mandy Rennehan, founder and CEO of Freshco, Jamie McMillan, ironworker and founder of Kickass Careers, and Matt Wayland, executive assistant with the International Brotherhood of Electrical Workers. More members are to be named later.

According to the federal government Canada will need 67,000 new journeypersons to sustain the country’s workforce in the 10 largest standardized trades by 2023.

However, the number of young women in particular who are considering a career as a skilled tradesperson, continues to be low. The government points to an OECD survey that found only two per cent of 15-year-old female students were planning to pursue a career in the skilled trades.

Rennehan, said it’s a trend that has to change given that women represent just four per cent of the skilled trades workforce.

“Everybody needs to understand that four per cent needs to shoot to 40 per cent, and then we will be the front-runner in the world,” she said.

Emily Boucher, of the Nova Scotia-based non-profit group Techsploration, said her group has been working through a mentoring program to introduce girls in Grades 9 through 12 to in-demand careers in science, engineering, trades and technology since 1998.

She said there has been a “significant shift” over the past five to 10 years in how employers in the trades have come to see women as a potential source of labour.

Boucher welcomed the renewed emphasis by the federal and provincial governments on promoting the trades and women’s place in them. “A diverse workforce is a more productive workforce, so it directly impacts innovation and bottom line in Canada,” she said.

The Ontario Home Builders’ Association (OHBA) will return to the Blue Mountain Village and Conference Centre in Collingwood, two hours north of Toronto, for its 2019 Conference and Awards of Distinction.

The OHBA has given the conference the theme of “Building Growth Together” in recognition of recently-passed Ontario Bill 108, known as the Housing Supply Action Plan, or ‘More Homes, More Choice Act’. This new legislation addresses several areas that had been of concern to the residential building industry, not the least of which was the red tape surrounding approval of proposed housing developments.

“It can take over 10 years for everything to be in place before a home can be built, “said Kathryn Segal, OHBA communications manager. “This is not conducive when you have a huge population growth.” That population growth is projected to be 2.5 million over the next 12 years and will require one million new homes to be built in the Ontario.

In a media release explaining the 2019 conference’s focus, OHBA CEO, Joe Vaccaro explained that the conference is organized to connect the association’s commitments with provincial government initiatives.

“We recognize that more homes means better affordability and that in order to meet the needs of new #homebelievers, to cut red tape and to get shovels in the ground the industry, municipalities and the provincial government need to work together.”

“The #homebelievers initiative was a conversation we were having prior to the election with both MPPs and candidates,” explained Segal. “The initial goal was to make civic and community leaders aware that the developer community was working on solutions to increase housing supply and affordability.”

The Bill 108 legislation now allows the focus of the 2019 conference to dovetail with new government initiatives.

“The whole point of the legislation is that there are provincial goals for housing that need to be met. The provincial government is now able to push forward with that in a way that they were not able to before. Our big push, therefore, is to work with the government on their policies. We will hold sessions at the conference concerning building safely, cheaper and faster to accommodate the anticipated needs. We’re also doing a big push on transit-oriented, higher density housing along transit lines, seeing that transit lines are going outside of the city to other communities.”

After an evening reception on Sept. 22, a full day of educational sessions follows the OHBA Annual Meeting of Members on the morning of Sept. 23. The luncheon keynote speaker — marketing guru Ron Tite — plus both pre and post-gala receptions, complete the day. The final day of the conference on Sept. 24 opens with a full day of business programming and entertaining activities, culminating with the prestigious OHBA Awards of Distinction Gala in the evening

Ministry of Municipal Affairs and Housing

Today, Steve Clark, Minister of Municipal Affairs and Housing, was joined by Andrea Khanjin,MPP for Barrie—Innisfil, to announce Ontario’s role in unlocking a property in Innisfil to build new homes for the community’s aging population.

Once complete, Tollendale Village 2, a planned retirement and long-term care facility, would be one of the largest seniors’ facilities in Simcoe County.

“The province doesn’t build housing, but we can cut red tape and create conditions that make it easier to build housing in areas that need it,” said Clark. “I am pleased to issue a zoning order to allow the Tollendale project to be built on Big Bay Point Road. This is part of our government’s people-first approach.”

“I am looking forward to what this announcement will mean for the residents in Barrie and Innisfil,” said Khanjin. “Tollendale has been working tirelessly to ensure that the aging senior population has a safe and affordable place to live. The work that this organization does on a day-to-day basis is a benefit to our community. We all know of a loved one requiring somewhere safe to live and this project is going to be providing the spaces they need.”

The planned seven-building complex is expected to include 388 retirement apartments, 160 long-term care beds and a 52-unit assisted living facility.

The new facility would allow residents to live in their apartment under a life lease, an innovative approach to housing that allows seniors to age in place, without having to own their home.

Average price of Barrie homes sold in January was $691,307

Monday, February 8, 2021 – The Simcoe County Home Builders’ and the Ontario Home Builders’ Association (OHBA) applaud the Ontario government’s decision to remove the construction permitting restrictions and the prohibition on starting new renovations that were part of the emergency orders that came into effect on January 13. The changes announced today, which will […] 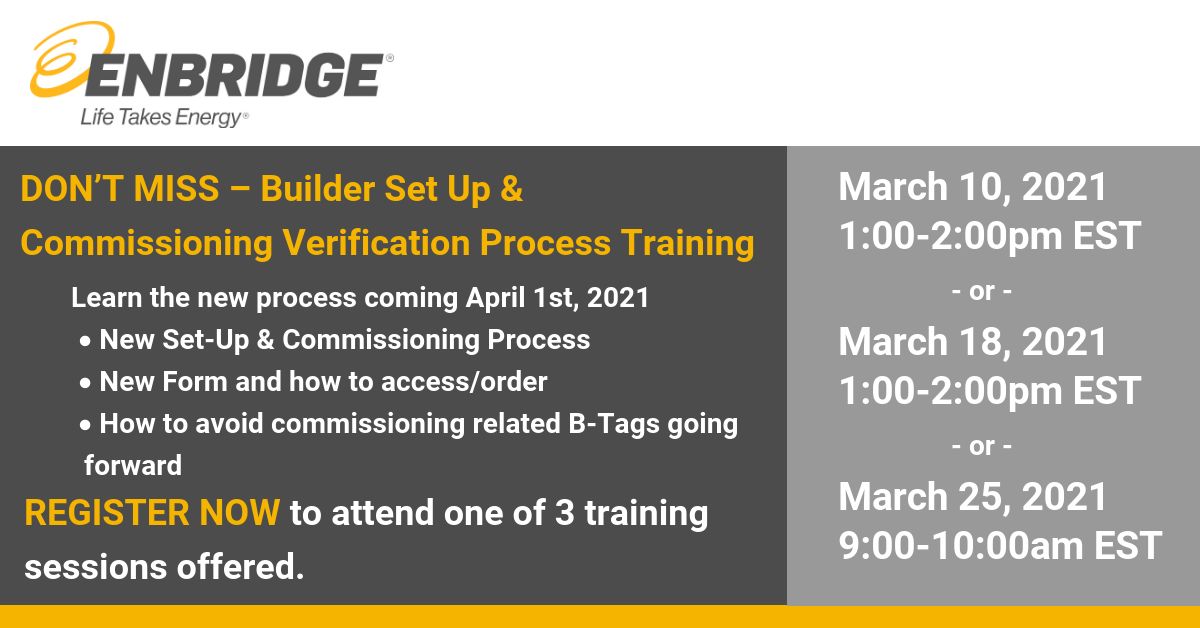 Enbridge Gas invites all builders and their HVAC teams to join their important online training sessions to learn the new set up and commissioning process, the new form and how to access/order it, and how to avoid commissioning related B-Tags moving forward.

New processes are starting on April 1, 2021. Register today for one of the three available sessions to ensure you and your team are prepared!